Abdalla Mumed was still a child when he put on his soldier’s uniform for the first time.

Drafted into the Ethiopian military at 17 years old, he served for nearly three years before he was falsely imprisoned and tortured. He and a few companions managed to escape. Hiding by day and walking by night they headed towards the Somalian border. Abdalla battled dehydration, starvation, and the fear of being captured by the soldiers sent to find and kill him, but he kept walking.

Just when the group’s strength was ready to give out, some generous villagers took pity on the young men. “The village men gave us water, milk, and tea. They brought us back to life and helped us cross the border into Somalia” says Abdulla.

He spent the next six years at a Somalian refugee camp before learning that First Presbyterian Church of Hickory, NC had agreed to sponsor his immigration process. In September 1989 Abdalla arrived at the Charlotte, NC airport ready to begin his new life in the United States. Eleven years later, citizenship papers in hand, he returned to Ethiopia. During his two month stay in Ethiopia, he met and married his wife, Chaltu.

It took nearly a year and a half for the couple to complete the immigration process so that Chaltu could join Abdalla in the United States. However, in 2002 the arduous process was successfully completed and the couple celebrated Chaltu’s arrival North Carolina.  Not only did Chaltu start a new life in Hickory, she and Abdalla also started their new family together. They welcomed Rahima, their first daughter in 2005 followed a year and a half later by their son Elemo. During this time, Abdalla enrolled in computer engineering courses at Catawba Valley Community College (CVCC) and began work with a local company to provide for his family.

After more than a decade of building a new life, Abdalla dreamed of having a house he and his growing family could finally call “home.”

Habitat for Humanity of Catawba Valley exists to make that dream of home a reality for families just like Abdalla’s. Habitat Catawba Valley is a Christian nonprofit charged with creating decent, affordable housing in partnership with those in need, and with making shelter a matter of conscience for people everywhere. To date, Abdalla and his family are one of 171 families who own a Habitat home in Catawba County. Each home built by Habitat Catawba Valley is a collaborative, community effort. Habitat homes are constructed with funds from the local community and through the generosity of hundreds of volunteers.

Our local team was more than happy to partner with Abdalla’s hardworking family and helped make their dreams of stability and homeownership a reality in January 2008.

However, while a Habitat home provides families a strong foundation, it isn’t a magic bullet; families must still put in the work to continue building their more secure future. Unfortunately, just as the Mumed family finalized the purchase of their home, Abdalla received devastating news; he was being laid off. The recession hit Hickory and Abdalla’s position was one of the first casualties.

Yet, drawing on the self-reliance he gained through the Habitat process, Abdalla was determined to never miss a house payment and accepted a part-time job just to make ends meet. That same year, Chaltu was badly burned in a kitchen accident and was transferred to Baptist hospital for nearly 3 weeks of intensive care. It was impossible to balance caregiving for his wife and children and his job, and by June 2008 Abdalla was once again unemployed.

Valuing the principle of commitment, the Mumed family kept their house payments current this entire time. However, they ended up quietly taking on significant debt in order to cover all their obligations. Because of the family’s absolute determination to make their payments and due to their reluctance to ask for help, Habitat was initially unaware of the financial strain the family was experiencing.

However, partnership to Habitat is about walking the walk. Therefore, when Abdalla finally turned to Habitat for help along the way, he was relieved to learn that our commitment to his family did not end when we handed him the key to their new home. We worked together with our local partners to temporality establish a more affordable house payment.

Habitat Catawba Valley also provided assistance through our Habitat Repairs! program when the Mumed’s heat pump broke unexpectedly several years later. It was the dead of winter when the family’s heat pump failed. Abdalla paid $1,300 to have a subcontractor fix it, but the unit was never returned to working order, leaving the family without heat and without their savings. That’s when the Mumed’s applied to Habitat Catawba Valley’s repair program. For a modest payment, Habitat was able to fix the unit, return the home to a healthy and comfortable environment, and empower the Mumed’s to feel invested in the maintenance of their home without creating an undue financial burden for the family.

Slowly but surely Abdalla and his family fought their way back to solvency despite the ongoing recession. As the economy began to recover and more doors opened, Abdalla celebrated many new milestones. He began work as a stocker in the local WalMart, a job which he continues to this day. May 2015 marked the culminated of his years of study, as Abdalla completed his coursework at CVCC and earned his Associate’s degree in Applied Science.

In 2011, Abdalla and Chaltu welcomed their third daughter, Radiyah followed by the birth of their fourth and final child Raeefah in August 2017.

Today, the Mumed’s continue to be an active part of the Catawba community. Chaltu stays home with the children and anyone who has had the opportunity to try her sambusas knows what a phenomenal cook she is! All four children are beautiful, helpful around the house, and the oldest three are doing great in school. Radiyah is competitive in soccer, and Rahima loves to read. To Kill a Mockingbird and A Wrinkle in Time are her most recent recommendations! Abdalla’s next goal is to secure a job that will allow him to use his degree.

For more than a decade, Habitat for Humanity has been there to both celebrate Abdalla’s successes and offer support in times of need. The Mumed’s have also welcomed our team into their home, shared fellowship, and showered us in food and fresh eggs from their chickens. During all this time, Abdalla has faithfully met his house and repair program payments, maintained his spirit of partnership, and shares his story to inspire other families who turn to Habitat for help.

Habitat for Humanity exists for hardworking people like Abdalla. Abdalla’s journey to find peace, love, and a home has been a long one; and all of us here at Habitat are blessed to serve and share in his journey.

There are many hard-working families that qualify for Habitat’s program in our community. We need your help to serve them. Please join us by donating today. 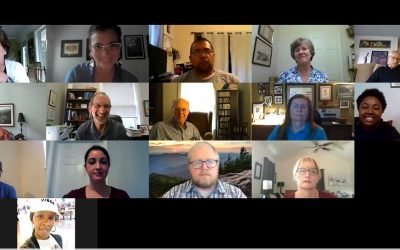 For Habitat homeowners, a home means stability.  If you’re someone that has always had a home and family, then you, like me, probably have never fully appreciated the importance of the stability that comes with living in your own home.  Habitat helps its homeowners build stability for themselves and their families in many areas. 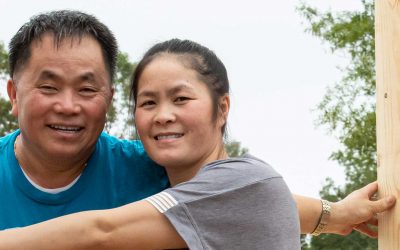 What do you think of when you think Habitat for Humanity?

You probably thought of three things:  building homes, volunteering, and donating.  These three things are what Habitat focuses on every single day in communities all over the world, but there is more to the story.

Shelter and safety go hand in hand. Though our doors have been closed to the public, the team at Habitat Catawba Valley has still been hard at work this entire time building forward. Now, we are excited to announce that we are beginning to resume some of our public...